At first glance, it looks like a giant child armed with a box of crayons has been set loose

upon the landscape. Vivid stripes of purple, yellow, red, pink, orange and green make up

A glorious patchwork. Yet far from being a child’s sketchbook, this is, in fact, the northern Netherlands in the middle of tulip season. The Dutch landscape in May is a kaleidoscope of color as the tulips burst into life. The bulbs are planted in late October and early November. More than three billion tulips are grown each year and two-thirds of the vibrant blooms are exported, mostly to the U.S. and Germany . 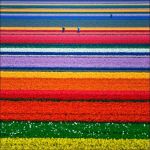 globe and the most eye-catching specimens changed hands for a small fortune. But like a

Rainbow, this colorful landscape is a short-lived phenomenon. When the flowers are gone,

the land will be cultivated for a rather more mundane crop of vegetables. The Netherlands

This entry was posted in Uncategorized. Bookmark the permalink.